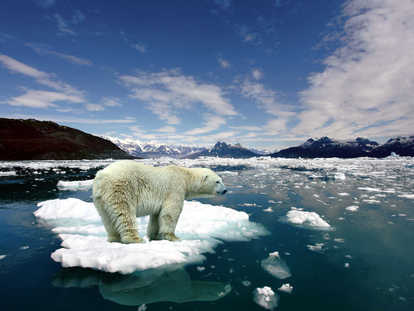 Climate change is defined as the long-term change in weather patterns due to human activities, such as industrial pollution. The Arctic tundra is changing dramatically due to human activities, as it is one of the most sensitive habitats in the world. The Arctic is warming at a rate of almost twice the global average,  which is catastrophic to organisms living in this habitat and all other habitats around the world.

Sea Ice
Arctic sea ice plays an important role in keeping the polar regions cool and helping moderate global climate. Its bright surface reflects sunlight back into space, keeping temperatures cool. However, when sea ice melts, the heat from the sun is absorbed by the ocean water, causing temperatures to rise. During the past 30 years, about 50 percent of Arctic sea ice cover, 80 percent of sea ice volume (thickness) and much of the old multiyear ice have melted. Animals such as the polar bear are dependant on sea ice  for nearly all of their life cycle functions. The most important use for the polar bears is hunting their prey. Polar bears almost exclusively eat seals, and their only access to the seals is from the surface of the sea ice.  When the sea ice melts, the bears remain trapped on land, and must survive on reserves of fat. This results in weaker bears with high mortality of offsprings. Polar bears would be unable to survive in this environment, along with arctic foxes and caribou who dig through sea ice to find food. This is one way in which diversity would be reduced due to climate change. 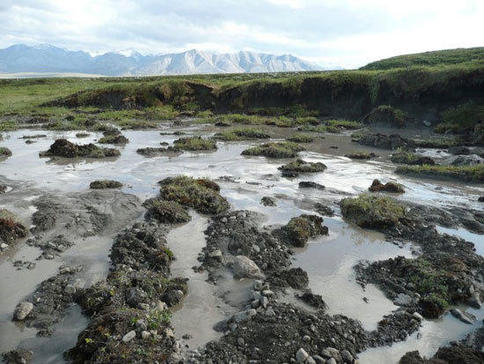 Vegetation and Animals
Permafrost,  the layer of frozen soil and dead plants that makes up the tundra's foundation,has begun to melt due to global warming.  This has had  dramatic changes on the vegetation in the tundra.  The increasing temperature allows shrubs such as alders and dwarf birch to replace moss and lichens, and woody plants to thrive. It has caused a decrease in cushion plants, which are plants that help other plant species to survive in harsh environments. Global warming has lead to a decrease in the diversity of plants, and has altered the habitat of the native animal species. Southern animals such as the red fox have begun to move into the tundra as temperature continues to increase, which has created great competition for food and territory. The adaptations that have enabled native plants and animals to survive in the tundra environment have limited their ability to compete with southern species. It is likely that native tundra species will be forced to move farther north or will be unable to survive against new invaders. 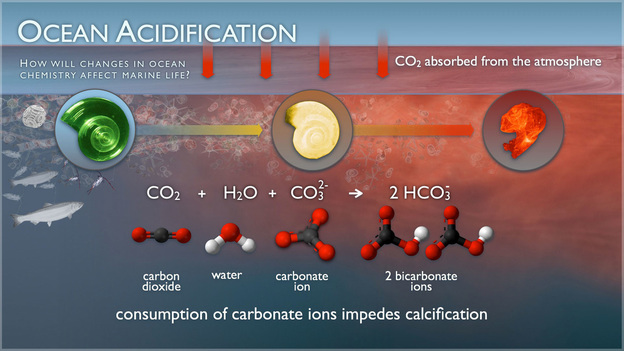 Ocean Acidity
The top layer of the ocean mixes with the gasses found in the atmosphere and these gases dissolve into the ocean.  Arctic oceans have absorbed more than 30% of human-generated carbon dioxide emissions, which have dramatically increased the ocean's acidity. Acidic ocean waters interfere with the development of coral reefs and the shells of oysters, crabs, snails and plankton. If action is not taken, these organisms will become smaller and will have problems reproducing.  This will lead to a drop in their population and the population of species that depend on  shellfish as a food source.  At the same time, some species will benefit from the increase in carbon dioxide such as the phytoplankton. The drops and growths of certain populations will create an unstable food chain, which could lead to the disappearance of certain species.